BuzzFeed was granted 11 minutes to spend with Apple CEO Tim Cook and their retail chief Angela Ahrendts, at the launch of the new Michigan Avenue Apple Store in Chicago. 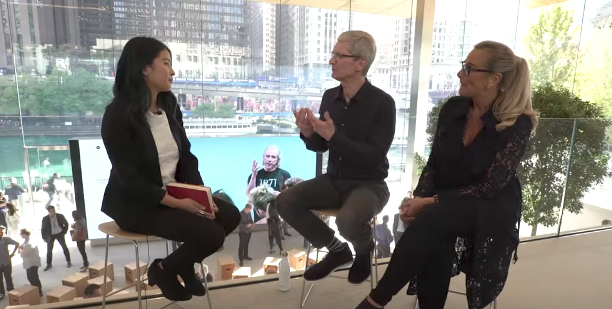 The interview sees Cook talk about the new store, which he says is “not really a store”, because instead of just buying things, customers go to Apple retail for “service and support” and also locations act as “part of a community.”

Cook noted Apple is working with the Chicago public school system, in a push to get coding as part of curriculums for kids. In regards to AR, he says “the beauty of AR is you’ll see uses of it throughout your lives” and that it will “change the way people shop.”

When it came to iPhone X and rumours of constrained supplies, Cook responded “we’ll see what happens,” and both Cook and Ahrendts laughed when BuzzFeed reporter Nicole Nguyen joked about hoping for line ups outside stores. Cook reiterated “iPhone X sets the tone for the next decade” when it comes to smartphones.

Apple’s press release yesterday on iPhone X pre-orders stated retail stores would some supply, and customers were encouraged to get to stores “early”.

Check out the rest of the interview below: