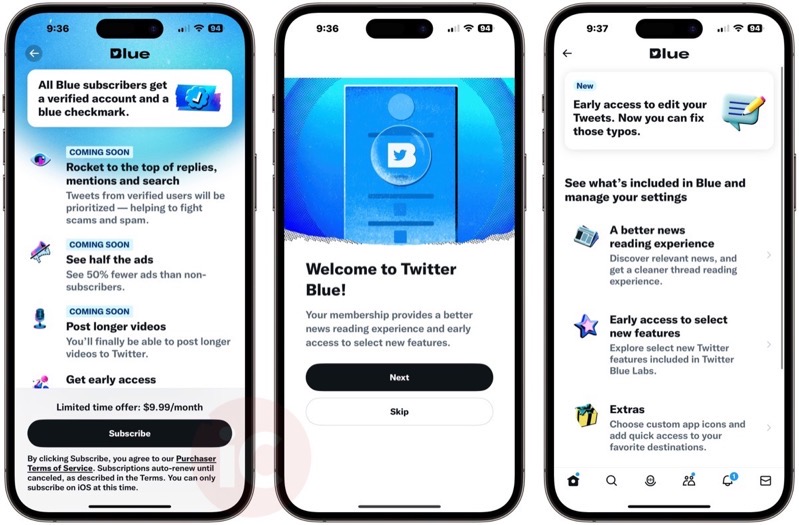 Elon Musk said in a tweet on Tuesday evening that Twitter is delaying the relaunch of its $7.99 USD ($9.99 CAD) a month Twitter Blue subscription to November 29 to “make sure that it is rock solid.”

Twitter disabled signups for the revamped subscription, which includes account verification and a blue “Verified” checkmark, shortly after launching it last week because it resulted in rampant impersonation of public figures and brands on the platform.

The social network, which Musk recently acquired for $44 billion USD, is actively deploying measures to curb impersonation. These include immediate suspensions for impersonators, new “Official” labels for authentic, notable accounts, and an upcoming feature that will let organizations verify associated Twitter accounts such as those of its employees, among other things.

Musk added in a follow-up tweet that “legacy” blue checkmarks obtained through Twitter’s now-defunct account verification process instead of paying for Twitter Blue will be removed “in a few months.”

Wong also found that device source labels are no longer visible under published tweets in the latest Twitter prototype. Musk announced this change in a Monday tweet.

Yup. The source field is gone from the Tweet details view in this prototype https://t.co/ZTFOnfdXvP pic.twitter.com/KaCOFmKzLE

When asked if the plan was to eventually also turn Twitter into a replacement for communication apps like WhatsApp, Musk said that purpose would be served by “X,” his planned “everything app.”

X will be the everything app

Back in October, the eccentric entrepreneur said buying Twitter would fast-track the creation of the X app.