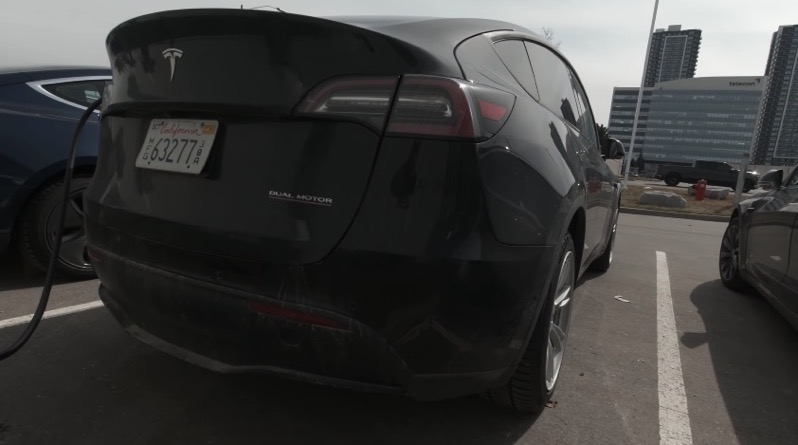 A Tesla Model Y spotted in Toronto, Ontario, by Mark Bianco, who runs the YouTube channel Tesla Backseatballer. Bianco was able to provide a decent video overview of the exterior of the new Model Y and shots of the white interior. It appears this is the same Model Y seen earlier in downtown Toronto back in January.

The Model Y Dual Motor Performance configuration with white interior, is a test vehicle from the electric vehicle automaker, seen charging outside Tesla’s Service Center in Vaughn. The channel was able to compare the differences between the new Model Y versus his own Model 3, in a nearly 9-minute video.

As for differences? Tesla Y wiper blades have two spray nozzles versus one on the Model 3. The side pillar where cameras are located on the Model Y have a smaller cutout for the camera. Bianco says the door handles are “the same” as his Model 3.


As for ground clearance, a 10.2-inch iPad was able to nearly fit underneath the Model Y, but not on the Model 3.

The tester Model Y had a spare tire in the back, most likely for the Tesla employee driving the vehicle to be prepared in case of a flat.

The first Model Y deliveries are coming to U.S. customers as soon as Friday, March 13, according to American users sharing details on Facebook. Canadian Model Y orders are set to deliver in “mid-2020”, while most are at the “prepare for delivery” stage.