The first calendar quarter wasn’t the best for Apple: After reporting its first drop in iPhone sales (which triggered a more than 8% drop in its stock price, eliminating market capitalization approximately equivalent to the value of Netflix), market research firm Strategy Analytics says Apple has lost smartwatch market share. 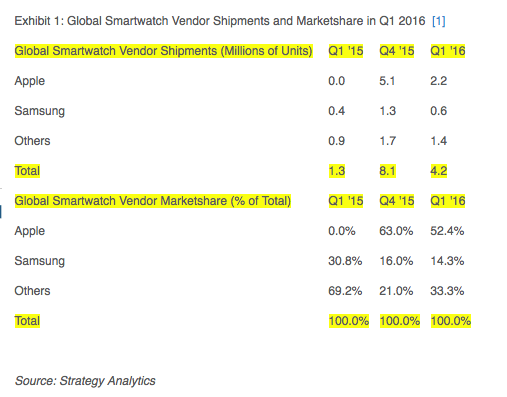 Apple shipped an estimated 2.2 million Watch units in the first three months of 2016, the market research firm estimates, which still ranks the device as the most sought-after wearable, but that’s less than half of the 5.1 million (estimated) units shipped in the holiday quarter.

With these 2.2 million Watch units, Apple has captured 52.4% of the global smartwatch market – down from 63% the previous quarter – and is followed by Samsung with a distant 14% secured by the 0.6 million units it shipped during the same time frame.

As Cliff Raskind, director at Strategy Analytics points out, the “honeymoon for version 1 of the Apple Watch is over.” He also highlights the possible compelling features of the second-generation Watch, which is rumoured to be shipping this fall: “Future traction for Apple Watch 2 will be closely linked to compelling apps that better exploit the usability of wearable tech while offering autonomous 4G connectivity and enhanced battery life – all of which are in rather short supply today.”