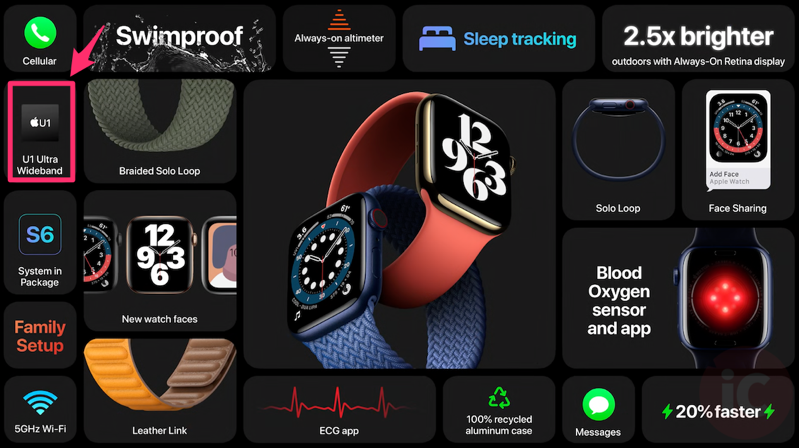 During Apple’s presentation of the new Apple Watch Series 6, the company didn’t have time to explain every feature, just the highlights in its jam-packed one-hour virtual event.

One major feature of Apple Watch Series 6 didn’t mention was the addition of the company’s U1 ultra wideband chip for spatial awareness, which first debuted in last year’s iPhone 11 and iPhone 11 Pro models.

You can see on the screenshot above from Apple’s presentation, of an overview of Apple Watch Series 6 features.

Ultra wideband is rumoured to be the main tech utilized by Apple’s rumoured AirTag trackers, to let users locate items. So far, the U1 chip hasn’t been fully utilized by Apple, but it would be cool for U1 devices to be able to locate each other.

Apple previously explained its U1 chips allow iPhone 11, iPhone 11 Pro and iPhone 11 Pro Max “to understand its precise location relative to other nearby U1‑equipped Apple devices. It’s like adding another sense to iPhone, and it’s going to lead to amazing new capabilities.”

Currently, “With U1 and iOS 13, you can point your iPhone toward someone else’s, and AirDrop will prioritize that device so you can share files faster. And that’s just the beginning,” explained Apple last year.

Apple Watch Series 6 specs detail the U1 chip and Ultra Wideband, but no other Apple Watches have the feature, including today’s Apple Watch SE, nor the Series 4 or Series 5 models.

Other notable features of Apple Watch Series 6 include the additional support of 5GHz Wi-Fi and an always-on altimeter, plus an always-on display that’s now 2.5x brighter outdoors.