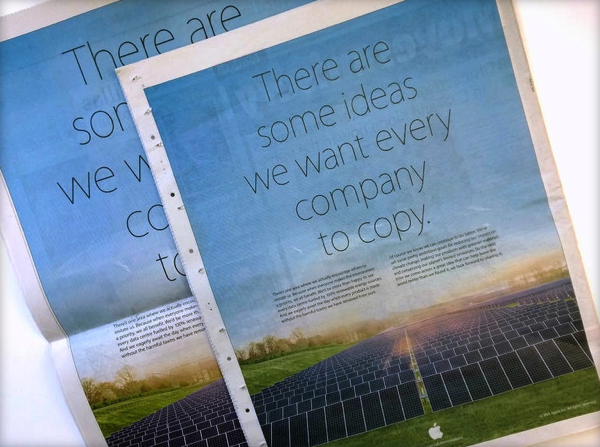 In line with previous rumours, Apple has turned worldwide retail store logos green today, for Earth Day, but has also taken the opportunity to have a dig at rival Samsung in a printed ad published in multiple newspapers across the globe, reports CNET.

The newspaper is headlined, “There are some ideas we want every company to copy”, and it includes to short paragraph that hints at the iPhone maker’s ongoing patent litigation with rival Samsung.

There’s one area where we actually encourage others to imitate us. Because when everyone makes the environment a priority, we all benefit. We’d be more than happy to see every data centre fuelled by 100% renewable energy sources. And we eagerly await the day when every product is made without the harmful toxins we have removed from ours.

Of course we know we can continue to do better. We’ve set some pretty ambitious goals for reducing our impact on climate change, making our products with greener materials and conserving our planet’s limited resources. So the next time we come across a great idea that can help leave the world better than we found it, we look forward to sharing it.

This ad is part of Apple’s environmental campaign that kicked off yesterday ahead of today’s event. The campaign includes a video in which Apple CEO Tim Cook talks about the company’s environmental efforts.

Weeks after the official launch of the iPhone 14, Apple is already scaling up its new flagship product production. In order to meet demand, Apple will now be manufacturing its devices in India via Foxconn's plant in Sriperumbudur, Tamil Nadu. Apple officially revealed the iPhone 14 series on September 7th. Following its launch soon after,...
Steve Vegvari
8 mins ago