Bell has announced on its website the company will take iPhone Xs and iPhone Xs Max pre-orders on Friday, September 14, 2018, the same day Apple will kick off their online pre-orders.

Last year, with iPhone X, Bell launched pre-orders shortly around 1AM PDT/4AM EDT, and we expect the same timeframe again this year for iPhone Xs and iPhone Xs Max. 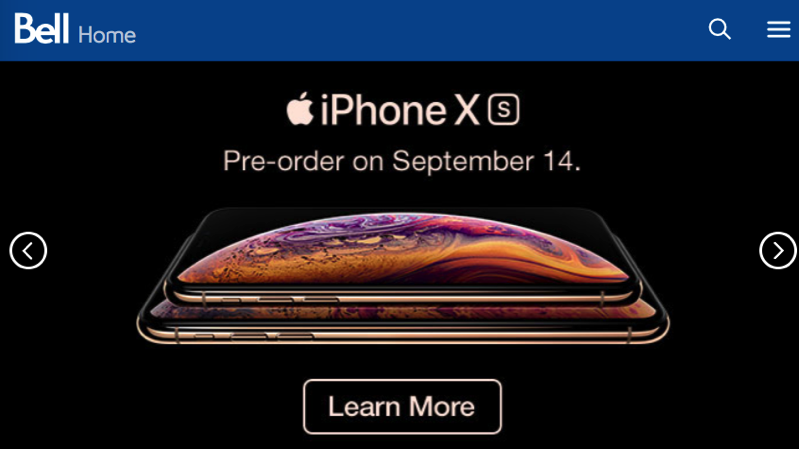 Bell’s two-year contract pricing for iPhone Xs and iPhone Xs Max has not been released yet, but expect it to be in line with previously announced prices from Rogers and Fido.

Last year’s iPhone X pricing on Bell started at $599.99 and $799.99 with minimum $95 per month plans. Expect this year’s iPhone Xs and iPhone Xs Max prices and plans to be more expensive than last year.

When Bell’s iPhone Xs and iPhone Xs Max pre-orders launch, we’ll update this post with pricing and other details.

Update Sept. 14, 1:20AM PDT: Bell’s pre-orders are now live for iPhone Xs and iPhone Xs Max. Pricing is as follows on a minimum monthly plan of $105 per month with 1GB data.

Bell’s website appears to be very glitchy as of 1:21AM PDT…loading very slowly.

Bell looks to have launched new Premium Smartphone Ultra Plus plans, which are available for new and existing customers, in-store only. These new plans take an additional $230 off upfront, but most likely will cost you at least $115 per month in a plan, like Telus and Rogers.