Rogers, Telus and Bell all offer plans with no overages, starting at $75/10GB for BYOD, with throttled speeds after initial data amounts are used up.

Now, it appears Big 3 flanker brands are jumping into the mix, with Bell’s Virgin Mobile now offering a $75/10GB no overage plan, only available as a loyalty plan, with throttling at 256 kbps after your main data is used up. 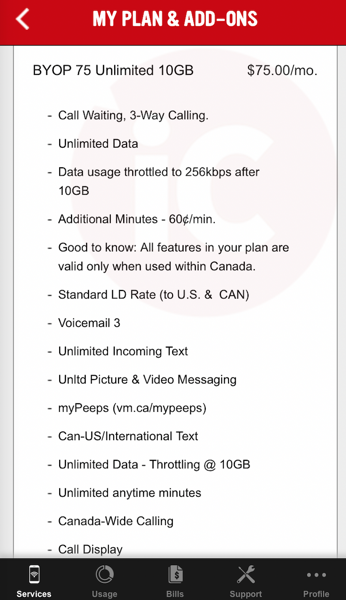 This plan, named ‘BYOP 75 Unlimited 10GB’, includes unlimited Canada-wide calling and global texts, to go with regular extras such as call display, voicemail, etc. The screenshot above is from a customer’s loyalty plan, and not a plan available to the public and regular customers.

The throttled data after 10GB is used up is at 256 kbps, just like Rogers and Bell. Telus has 512 kbps throttling after 10GB data is used up.

Regional carrier SaskTel recently launched a $70/15GB BYOD plan with no overages and 2 Mbps throttling after main data buckets are used up, four times faster than throttled Telus speeds. Eastlink similarly has $75/15GB BYOD plan (data access cuts off at 15GB), while Videotron has $75/17GB plan in response to the Big 3 as well. Freedom Mobile responded with new data bonuses, with plans available at $60/15GB.

Let us know if you’ve been offered this this Virgin Mobile $75/10GB BYOD loyalty plan. Get ready for Fido and Koodo to match this loyalty offer in 3…2…1…

Update 8:00pm PDT: A Virgin Mobile spokesperson clarified to iPhone in Canada the company does not plan to launch a $75/10GB no overages plan. This article has been updated to reflect the change.