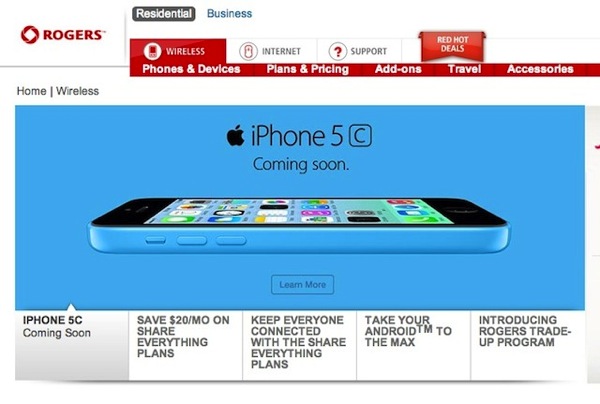 Customers will have to check the Rogers/Fido Reservation System to see if they are eligible to reserve the iPhone 5c.

The start time is similar to last year for the iPhone 5, which started between 6AM – 7AM EDT.

Update 9/13: iPhone 5c pre-orders are set to go live and reservations will require a $40 deposit again. Two year term pricing should be as follows, as revealed earlier by TELUS:

Rogers's President of Integration, Dean Prevost, accidentally revealed during a Competition Tribunal hearing against Canada's Competition Bureau on Thursday that he is set to receive a $2 million bonus if the company's proposed $26 billion acquisition of Shaw Communications goes through — reports the Hanna Herald. This figure had previously been confidential but slipped out...
Nehal Malik
5 hours ago

Image via RFD user ‘h2o-‘ Rogers-owned Fido is offering up an in-store Black Friday and Cyber Monday deal for 2022, in the form of a $30GB plan with 20GB of data for new customers. This plan is supposed to debut on Friday, November 25, but some stores have started to offer it early. This plan […]
Gary Ng
6 hours ago

Shaw Communications CEO Bradley Shaw told the Competition Tribunal on Wednesday that it was "extremely difficult" for the Shaw family to give up the business and agree to Rogers's proposed $26 billion takeover of the company (via Financial Post). Canada's fourth-largest telecom operator has been a family affair since its inception. Bradley Shaw took over as...
Nehal Malik
8 hours ago