Apple stock price was down yesterday during the keynote that kick-started the annual WWDC, but that’s history now. The two-hour-long announcement turned out to be too short to introduce all the new features Apple will implement on Mac OS X 10.10 Yosemite and iOS 8, so here is a list of essential iOS 8 features that didn’t make the spotlight during the keynote. After looking at what Apple plans to offer this fall, analysts and investors seem confident of the company’s growth. Below, you can find some analyst reactions to yesterday’s announcements (via AppleInsider).

By the way, Tim Cook’s jokes about Android, as well as the stats the CEO presented, suggest more iPhone growth as Android users move away from Google’s mobile platform. Rob Cihra in particular was impressed by the rapid adoption of Apple’s latest operating system compared to the competition.

For Katy Huberty of Morgan Stanley, Apple’s move to open the Touch ID API to developers was a clear hint at the company’s efforts to prepare the ground for mobile payment services. Also, she sees iCloud improvements as another revenue stream that would add around $5.3 billion for the company.

Analyst Gene Munster of Piper Jaffray also sees future opportunities for Apple to monetize new services. He was particularly excited by Apple’s entrance into the medical field with HealthKit and the Health app, and he projects that HealthKit tools will set the stage for the rumoured iWatch. 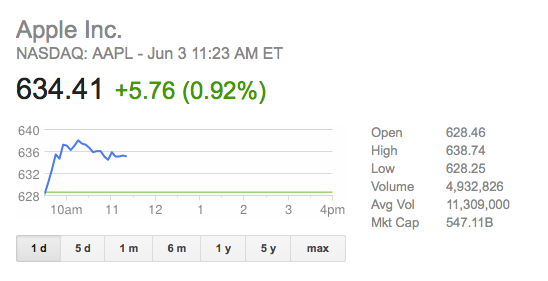 It appears that every analyst has been charmed by yesterday’s presentation, and so are the investors. As of writing this article, Apple’s stock price is up 0.92% to $634.41, and still rising.