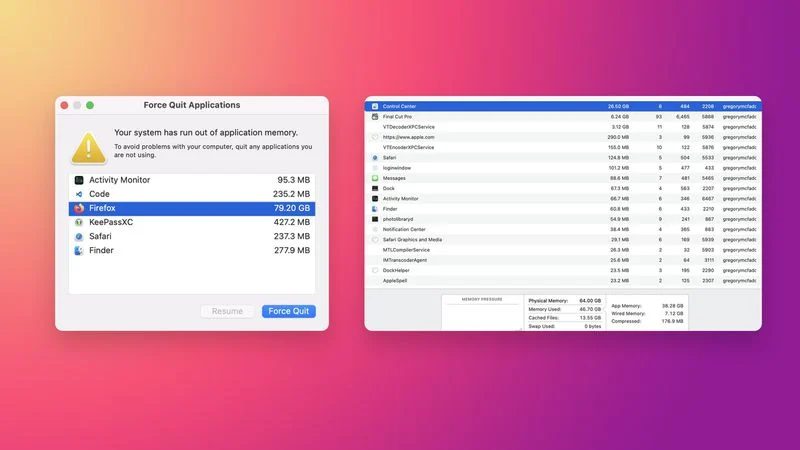 According to MacRumors, a number of users running macOS Monterey are reporting “memory leak” issues, where a program or process keeps running in the background while occupying increasingly high amounts of RAM, to the point of absurdity.

The problem appears to be localized to macOS Monterey, but isn’t brought on exclusively by updating to it. Apple’s new 14″ and 16″ MacBook Pro models, which ship with macOS Monterey out of the box, are also vulnerable to it.

Reports of the bug are coming in from all over — Reddit, Twitter, the Apple Support Communities, and more, with some users detailing irregular memory usage in the tens of gigabytes. On the extreme end of the spectrum, one affected user shared screenshots of Mozilla Firefox using 79.20 GB of RAM(!) on their 16″ 2021 MacBook Pro.

@FirefoxSupport
Firefox has a memory leak!

Many reports also name Control Center as the culprit, with YouTuber Gregory McFadden posting a screenshot of Control Center using well over 20 GB of RAM on their decked-out 16″ 2021 MacBook Pro with an M1 Max chip and 64 GB of RAM.

So glad I got 64GB of memory on my new Mac so I can use 26GB of it for control center… Wait… what. pic.twitter.com/inCOPaii1o

Users are also experiencing the same issue with Safari and the Pages app, among others. It’s shaping up to be an issue that affects the OS itself, and can latch on to a variety of different programs. The 2021 MacBook Pro may have proven to be a savant at managing memory in RAM tests, but even the next generation of Apple Silicon can’t do much when faced with a memory leak.

Widespread reporting from users across different platforms suggests the more common bug is a pop-up that reads, “Your system has run out of application memory.”

Apparently, affected users are seeing the pop-up in question despite minimal use of their Macs with considerable amounts of memory to spare. A number of users have been able to resolve the problem with a restart, while others say it only gets rid of the pop-up temporarily.

macOS Monterey became available to download last week, but between this memory leak issue and another that bricks older Macs when you update, users who haven’t updated yet will be better off biding their time on macOS Big Sur until Apple gets things sorted.