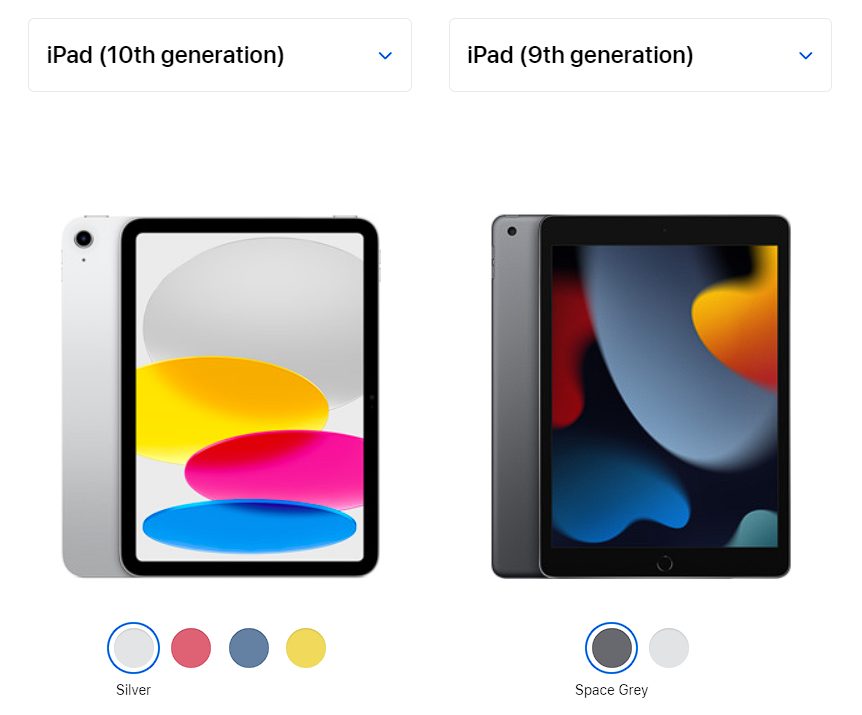 While the launch wasn’t as ceremonious as last month’s debut of the iPhone 14, the design update definitely is. The 10th-generation iPad is a direct successor to last year’s 9th Generation iPad.

Apple’s base iPad models have always been crowd-pleasers thanks to their (relatively) affordable price tags, especially for education customers. However, this year’s model brings a $150 price hike over its predecessor.

Apple’s latest entry-level iPad is available in a selection of four vibrant colours: Silver, Pink, Blue, and Yellow. In comparison, last year’s iPad 9 only comes in Silver and Space Gray.

Despite releasing the 2022 iPad, Apple has decided not to discontinue the model it replaces just yet. You can still buy the iPad 9, although it now starts at $449 in Canada after a price bump earlier today.

Apple has also upgraded the main camera on this year’s base iPad, going from an 8MP wide-angle snapper with ƒ/2.4 aperture on the iPad 9 to a 12MP shooter with ƒ/1.8 aperture on the new model.

While the 2022 iPad has the same Ultra Wide front camera as its predecessor, the orientation has changed. On this year’s mode, the front camera goes from a portrait orientation to a landscape orientation, which isn’t all that surprising given that’s how you’d use the iPad for video calls and meetings.

In addition, the 2022 iPad’s front camera also gets Smart HDR 3 for photos.

In keeping with Apple’s tradition of giving each new iPad model a generational upgrade in the processing department, the 2022 iPad is powered by Apple’s A14 Bionic chip. That’s the same processor that powers the iPhone 12 lineup. Last year’s 9th-generation iPad was equipped with the A13 Bionic.

While the A13 and A14 chips share the same number of CPU and GPU cores, the A14 Bionic offers an overall uplift in performance and also has double the Neural Engine cores for AI workloads.

Apple’s entry-level iPad finally makes the switch to USB-C this year, well in time for the European Union’s 2024 timeline to enforce USB-C adoption on all devices. All other current-gen iPad models already have a USB-C connector.

Both the 2022 iPad and the 2021 model have Touch ID. However, this year’s iPad ditches the Home button for an all-screen design, so its Touch ID sensor is built into the top Power button instead — much like the latest iPad mini and iPad Air.

Both iPad models support Apple Pencils (1st generation and above), but you’re going to need a $10 USB-C to Apple Pencil Adapter to pair and charge your Apple Pencil with the 2022 iPad.

Connectivity depends on which variant you purchase of either iPad. That said, the 2022 iPad has Wi-Fi 6 and Bluetooth 5.2 (instead of Bluetooth 4.2 on its predecessor), and the Wi‑Fi + Cellular variant also has support for 5G (sub-6 GHz). Both devices work with Nano-SIM and eSIM.

The Wi-Fi-only version of this year’s model is 10 grams lighter than its predecessor, while the Wi-Fi + Cellular version weighs 17 grams lighter.

The 2022 iPad’s redesign is perhaps the biggest update. Apple has finally retired the years-old entry-level iPad design with the glaring bezels for a flat-edge design language that’s more in line with the iPad Pro and the 5th-generation iPad Air.

Both models can be configured with either 64GB or 256GB of internal storage.

The 2022 iPad’s new design is certainly enticing, it finally ditches the ancient Lightning port for USB-C, and it also comes with Wi-Fi 6 and 5G. That said, it also carries a significant price bump.

Meanwhile, the 2021 iPad is still available for purchase and starts at $150 less, and you might even be able to snag one on sale sometime soon — possibly around the holidays.

If you’re in the market for an entry-level iPad right now, the decision might just come down to how much you’re looking to spend. The iPad 9 is going to serve users just fine in the near future. Also, if you want everything the iPad 10 has to offer and more horsepower, you might even want to consider stepping up to the $799 iPad Air with M1.

Click here to learn more about the 2022 iPad on Apple.ca. Pre-orders for Apple’s 10th-gen iPad are already live, with an official launch scheduled for next week on Friday, October 26.