In an interview with The Financial Post, American Express has commented on how Apple Pay has gone for the company’s first month in Canada.

Suat Alaybeyoglu, vice-president of consumer acquisition and management, told reporter Christina Pellegrini Apple Pay “is not, by any means, exclusive to American Express,” while clarifying “We’re just the first issuer to launch it. I have no idea why the other banks didn’t launch it and I don’t know what the other plans are. The reason I am being cautious is maybe they (other issuers) enabled it this morning.”

The credit card company was mum on early Apple Pay usage, only to say “provisions have exceeded our expectations,” (no expectations were revealed) while commenting usage was “seeing the most traction at coffee shops and quick-service restaurants.” No numbers were provided on how many cards work with Apple Pay aside from “majority” of their offerings, nor how many terminals or retailers can accept the card in Canada.

Recent Nilson Report data, which American Express referred to, noted the company had 8.2 per cent marketshare in Canada with its 4.6 million cards.

While many are holding out for Canada’s big banks to support Apple Pay, reasons are unclear why card support is absent, despite previous rumours of transaction fees holding up negotiations.

Analysts at CIBC World Markets said “the impact on earnings would be immaterial for the sector in the near to medium term,” even if Apple took 30 per cent of all credit card transactions in Canada at a mere 10 basis points per sale, well below the rumoured 15 to 25 points reported by the WSJ back in the spring. Apple reportedly receives $0.15 for every $100 spent via Apple Pay in the U.S.

Interac—the non-profit co-op founded by RBC, CIBC, Scotiabank, TD, and Desjardins—which runs Canada’s debit card system, told The Financial Post it has seen a surge of contactless payments increase by 163 per cent this year, compared to 2014. The company said “Our goal is to have Interac Flash available on every wallet,” and that it would be “ready when our stakeholders are ready.”

Apple Pay launched back on November 17 with American Express cards only (as we told you it would). TD Canada Trust is pegged as the next likely candidate to support the mobile wallet after its website inadvertently leaked support for Apple Pay in October, which the bank called incorrect info posted “temporarily on our website.”

There may be some developments though, as TD Canada Trust’s Apple Pay webpage URL (Update: corrected URL) has recently resulted in a proper “We’re Sorry” landing page (as of 11 days ago), as opposed to a straight up error, hinting support could be coming soon: 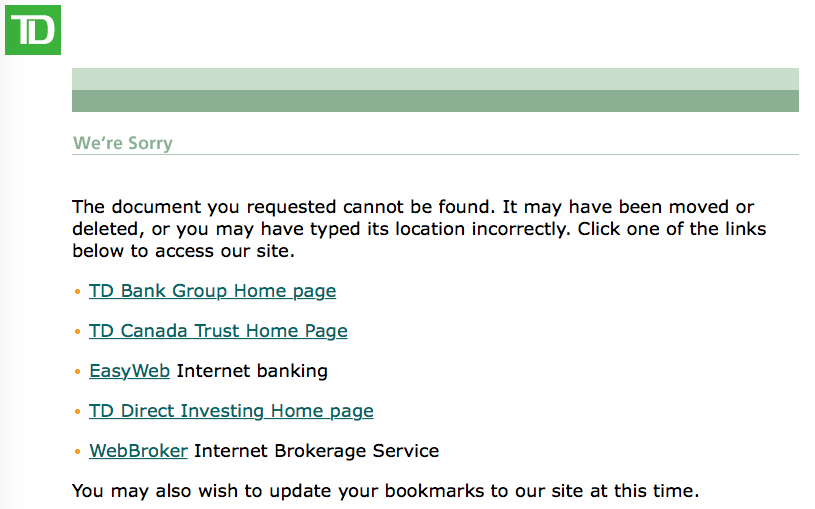 Also, we previously reported adding a TD VISA to Apple Pay now provides a different “error” message, with some other cards showing the same.

A user on Reddit last month claimed Apple Pay was being pilot tested by an unnamed Canadian bank employees. Some banking customers have gone so far as to file a complaint with the Competition Bureau for the lack of Apple Pay support in Canada.

You can check out a list of retailers that accept Amex and Apple Pay here, or by using one of these free iOS apps.

How has your Apple Pay experience been so far? Any bets on the first Canadian bank to launch Apple Pay support?