Apple continues its march toward a dream $1 trillion goal: As of yesterday, its market capitalization surpassed $700 billion, reports Bloomberg. 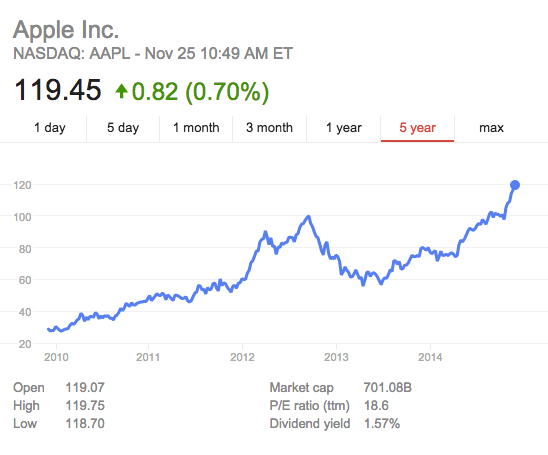 The company’s stock price was up 0.8% to $119.59 in the morning, giving the world’s largest company by market cap a value of $701 billion, a milestone no other US company has reached. To put this into perspective, Exxon Mobil has a market cap of $405 billion. Apple’s market cap is 1.7 times bigger than the value of the world’s second-biggest company.

Apple’s stock price is up 48% year-to-date, and more than 60% over the past year. It is worth noting that Apple’s stock price has risen 24% since the launch of the iPhone 6 and 6 Plus, and the unveiling of the company’s plans to step into the wearables market with the Apple Watch.

“Given Apple’s significant portfolio refresh over the past three months, the lack of innovation from competitors and a constructive spending backdrop in the U.S. market, we believe Apple has opportunity to shine bright this holiday season,” Brian White, an analyst at Cantor Fitzgerald, said Nov. 24 in a note to investors.

Apparently, during the September 9 event, Apple was able to prove that innovation is part of the company’s DNA, as expected, and silenced naysayers.