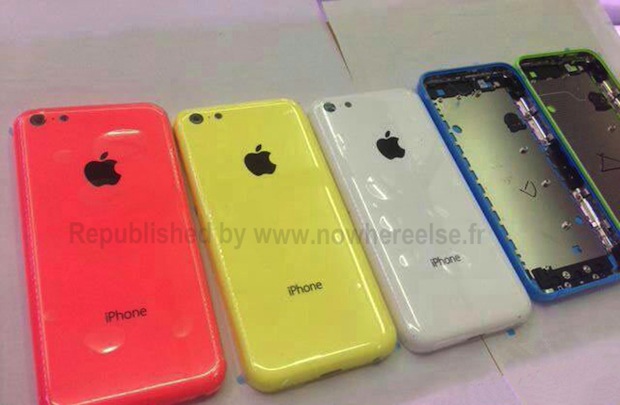 Just days after we saw alleged images of the lower-cost iPhone rear shell in green, the French site Nowhereelse.fr has obtained another set of images showing the plastic rear shell of the rumoured budget Apple handset.

The images are of better quality than those posted earlier last weekend, yet they don’t deliver any new information. Just like we have already seen with other rear shell leaks, the rear casings appear to be manufactured from shiny plastic.

We have seen green, red, white, and yellow cases with metal substructure; the new photos show a blue plastic shell as well.

Macotakara’s sources had already pointed to possible colour options earlier this year. Back in May, the Japanese blog heard about two sets, but we haven’t see a blue plastic shell before. Its recent sources, however, say that Apple’s lower-cost iPhone will be available in black, white, pink, orange, and blue. The above image leak would seem to confirm this information.

We also need to keep in mind that the above images may be showing Chinese copies, but the rumour mill has been busy spilling information about the lower-cost iPhone recently. And if the whispers are correct, we will likely see a budget iPhone heading towards customers in September or October this year.

Netflix has announced it will be making its own ‘world class’ games studio, to be established in Helsinki, Finland, led by Marko Lastikka as the studio director. Amir Rahimi, VP of Game Studios, Netflix, said on Monday this move “is another step in our vision to build a world-class games studio that will bring a variety […]
Gary Ng
51 mins ago