Yesterday’s Apple Pay launch for RBC and CIBC meant other banks saw their social media channels flooded with requests from customers looking from the outside. Some did better than others, meaning some actually had a human write decent responses, while lazy accounts just copied and pasted responses, like PC Financial: 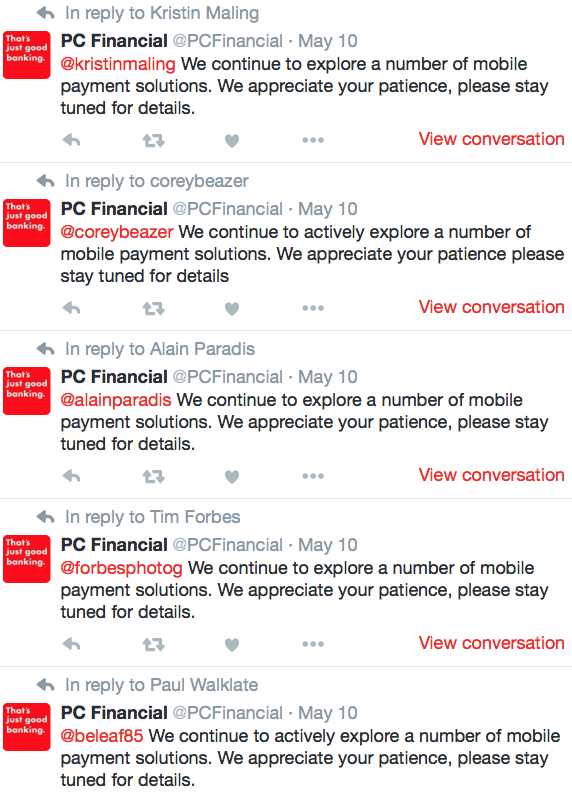 Desjardins tried to jam as much text into 140 characters, making their tweets look like they were sent by a texting tween:

But just this morning, Tangerine has outright announced on Twitter they will be supporting Apple Pay “in the near future” and would share updates as they become available:

One possible reason for the delay could be the addition of getting debit cards with NFC support, as Tangerine responded to one customer to say “while our MasterCard is equipped w/ Tap to Pay, we’re working on getting it for our Client Cards.”

Apple said yesterday the Canadian delay for Apple Pay was linked to the creation of tokenization for the Interac network, which banks use for their debit cards.

According to sources, Canadian banks allegedly agreed to pay Apple 15 cents per every $100 spent using Apple Pay, as part of their interchange fee terms, similar to other agreements in Australia and the UK.

Back in February, Tangerine customer care told customers they were “confident” Apple Pay would be supported in the near future.