Apple’s iPhone and iPad may have been placed top by those surveyed in J.D. Power’s annual customer satisfaction survey, but this can’t be said of the shoppers who actually step into brick-and-mortar Apple Stores. In fact, the beautiful Apple Stores have dropped from first place to 13th in a league of the UK’s favourite retailers compiled by Which?, reports the Daily Mail. 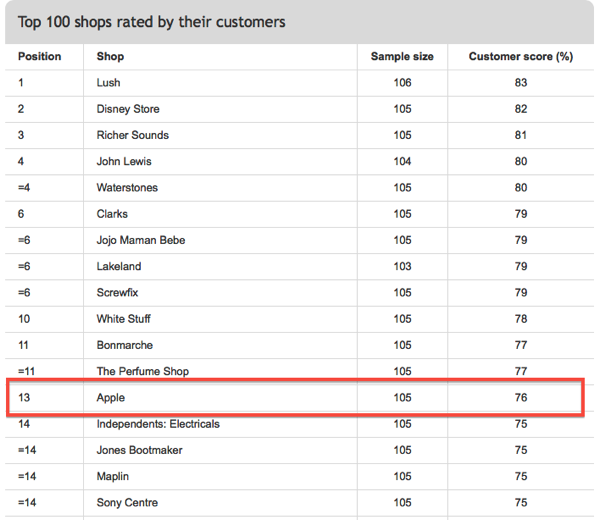 It isn’t about the nice minimalist stores with glossy white walls and tables, but it is mostly related to the “Genius bar” where customers get help in setting up, fixing or understanding the operation of their device.

As the report points out, customers cannot simply step in to the store and get access to the Genius bar, because these geniuses are so busy that it sometimes it take a few days to get an appointment.

And this also raises the question of whether Apple’s devices are indeed as simple as the company claims.

Apple was rated as the top shop in 2013, but it fell to 13th this year. Although Apple is still rated highly, praise for its shopping experience is more muted than in 2013 – shoppers still like Apple, but are less likely to love it.

Several customers complained about it being difficult to book an appointment with its ‘genius bar’ service, which helps you if you’re having technical problems.

We already know that Angela Ahrendts, who started working at Apple on May 1, has great plans, but it seems that she has a bigger job than she might have expected.

The survey is based on the views of 12,500 shoppers, and produces customer scores for 100 of the UK’s biggest shops.