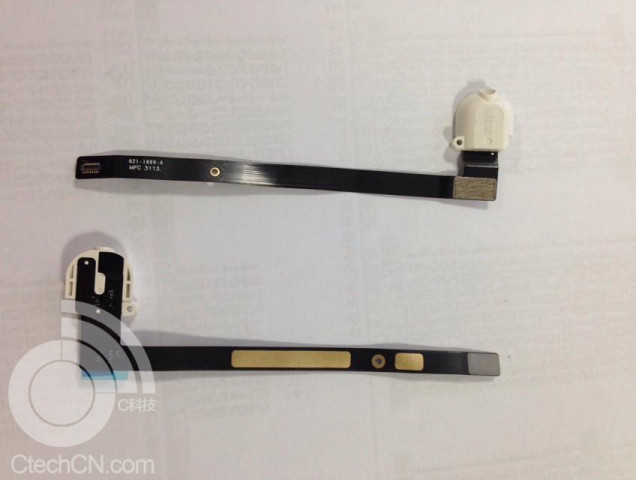 While all eyes are on Apple (and its forthcoming iPhone 5c reservations announcement), here are some fresh rumours about the forthcoming iPad 5. CTechCn, which has turned out to be a reliable source of Apple rumours, at least regarding the iPhone 5c and iPhone 5s, has obtained some images of what they claim to be the iPad 5 headphone jack.

The image shows the front and back of the alleged iPad 5 component, which carries the identification number 821-168-A and MFC 3113. In terms of design, the alleged audio jack ribbon flex cable for iPad 5 looks different to the one marketed for the iPad 4, which could be the direct result of the rumoured iPad mini-like redesign.

The blog also speculates that the iPad 5 will be powered by Apple’s recently introduced A7 chip — we have yet to see whether TSMC or Samsung will manufacture it. The iPad 5 is widely expected to be launched later this fall alongside the Retina iPad mini 2. A possible release date could be during October, like last year.