iFixit has published the findings of their most recent teardown, this time of the new 13-inch MacBook Pro without Touch Bar. In their teardown, iFixit gets deep into what makes the new MacBook Pro tick, finding a battery that is 27 percent less powerful than last year’s model, an upgraded Butterfly 2.0 keyboard, soldered RAM, and a proprietary SSD.

Additionally, iFixit finds evidence that the headphone jack could be on its way out, much like Apple’s iPhone 7 models. 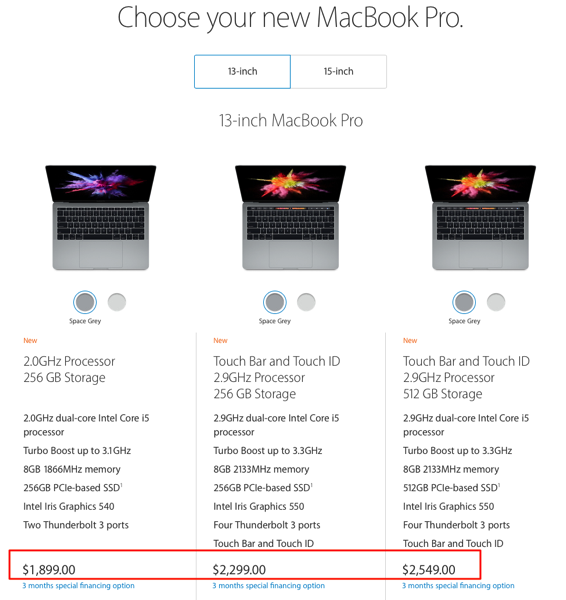 The new MacBook Pro contains a 54.4 Wh battery, which is considerably smaller than its predecessor, holding about 25% less charge. Despite holding less juice, Apple has said that the new battery is still rated for about ten hours of use. As such, it has yet to be determined whether the smaller battery will impact everyday usage of the device. While getting smaller, the battery is also incredibly difficult to remove or replace due to being secured by very strong glue.

The MacBook Pro’s upgraded keyboard and trackpad are both evident in the teardown, as the laptop houses a trackpad that has two times the surface area of its predecessor. The laptop also boasts a “second-generation” butterfly mechanism for its keyboard, as iFixit found that the keycaps are slightly taller and easier to locate. “The dome switch under the butterfly mechanism also appears to be heftier,” says the report.

The hard drive is easily removable, and not soldered to the computer like many other Apple laptops. It is, however, controlled by custom proprietary Apple SSD silicon, which was previously featured in the Retina iMac. While the hard drive is removable, the Apple controller means that it cannot be replaced yet, as compatible third-party components have yet to release. According to Apple, the SSDs are 100% faster than the previous generation. Unfortunately, the RAM is not user-upgradeable at all, as it is completely soldered to the board.

iFixit also found evidence that the headphone jack could be well on its way out in future MacBook Pro models. “Miraculously, the headphone jack survived,” the site writes in its report on the laptop, “but given that it’s a single modular unit (with two attached microphones) taped to the bottom of the fan, it could easily be dropped in favor of a Lightning or USB-C connector at the next MacBook release.”

How does everyone feel about the new MacBook Pro? Is it a great addition to the Mac lineup, or a letdown?