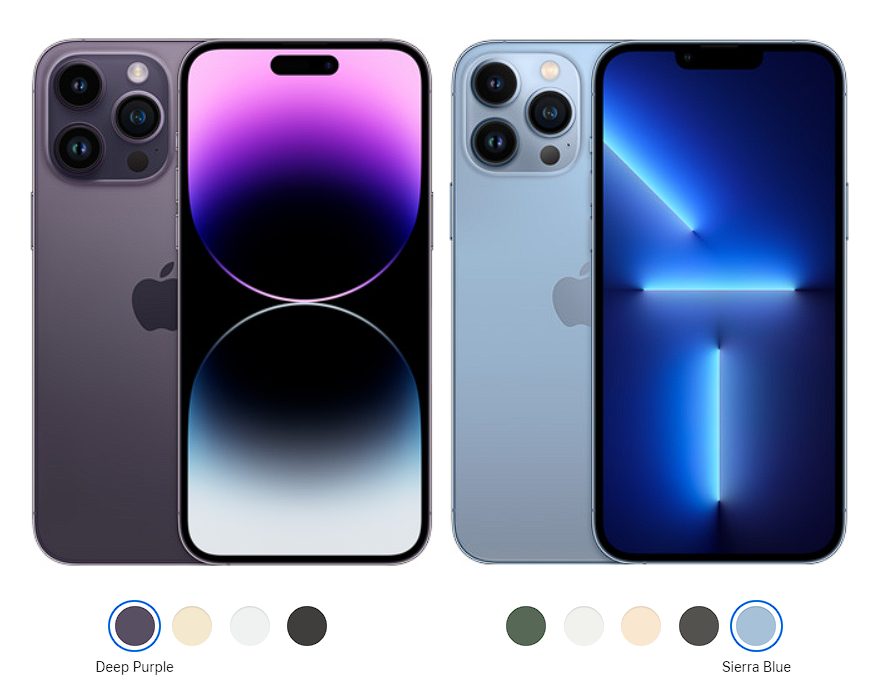 On the outside, the only noticeable changes from the previous generation are a larger camera island on the back and a new pill-shaped display cutout on the front. But there’s more on the inside.

That’s the same launch pricing as last year’s iPhone 13 Pro and Pro Max, which Apple has now dropped from its lineup.

Apple has replaced the oft-criticized notch with a pill-shaped cutout that’s less of an eyesore. Instead of the notch that blocked most of the status bar on previous iPhone models, users now get the new “Dynamic Island,” which Apple called “a new way to interact with iPhone.”

That’s right — that hole at the top of your display is no longer a distraction, it’s a feature. Apple said the Dynamic Island shows alerts using the Face ID and front camera cutout. This feature is interactive, complete with lively and fluid animations.

The iPhone 14 Pro and 13 Pro share the same 6.1″ (6.7″, in the case of their Pro Max variants) OLED Super Retina XDR displays with ProMotion (adaptive 120 Hz capability). This year’s model, however, also brings Always-On display functionality to the table.

In addition, the iPhone 14 Pro sports thinner bezels than its predecessor. The iPhone 14 Pro (2556×1179 pixels) has an ever so slightly higher screen resolution than the iPhone 13 Pro (2532×1170 pixels), thanks to the front camera and Face ID tech taking up less space in a pill-shaped cutout. Pixel density remains the same on both models, however, at 460 ppi.

Both generations feature a triple camera setup on the rear. While the iPhone 13 Pro has 12MP sensors for all three cameras, this year’s “Pro” iPhones get a major camera upgrade with a beefed up 48MP main Wide camera and improved 12MP sensors for the Ultra Wide and Telephoto shooters.

iPhone 14 Pro’s main 48MP camera has a quad-pixel sensor that’s 65% bigger than before, according to Apple. There’s also a new 23mm focal length, as well as major low light improvements with what Apple calls its new “Photonic Engine.” Apple has also improved the 2x Telephoto lens to offer more details and bokeh.

To top things off on the hardware side, the iPhone 14 Pro gets Apple’s new second-generation sensor-shift optical image stabilization (OIS) and Adaptive True Tone flash.

The iPhone 14 Pro is capable of 4K HDR video recording up to 30 fps in Cinematic Mode, as opposed to 1080p at 30 fps on its predecessor.

The rest of the camera specs remain the same for the iPhone 14 Pro and iPhone 13 Pro.

iPhone 14 Pro and iPhone 14 Pro Max are powered by Apple’s A16 Bionic processor, a generational upgrade over the iPhone 13 Pro’s A15 Bionic and Apple’s first chip based on the 4nm process. Apple hailed the A16 Bionic as the new “fastest chip ever in a smartphone.”

This year’s entire iPhone lineup also introduces the long-rumoured Emergency SOS via Satellite functionality, which lets users send emergency texts even when there are no cell towers around. The feature launches in November and will be free for two years. In addition, the iPhone 14 Pro also brings Apple’s new Crash Detection feature.

Battery life gets a slight bump on this year’s iPhone 14 Pro, which manages up to 23 hours of video playback versus the iPhone 13 Pro’s 22 hours.

Both of this year’s Pro models are just a tad chunkier than their counterparts from last year, but the most noticeable physical difference between the two is the size of their respective rear camera bumps. We got a sneak peek at the larger camera module last month, and it is more pronounced on the smaller frame of the iPhone 14 Pro than on the larger Pro Max.

Both devices have a Ceramic Shield front for added protection. Water resistance is also identical, with both models being rated IP68 under IEC standard 60529. They are water-resistant to a maximum depth of 6 metres for up to 30 minutes.

The iPhone 13 Pro and its successor both feature MagSafe to support wireless chargers and accessories.

Capacity options haven’t changed between the two generations, with the iPhone 14 Pro also available with 128 GB, 256 GB, 512 GB, or a whopping 1TB of internal storage.

The iPhone 14 Pro and iPhone 13 Pro both have Dual eSIM support, furthering Apple’s push for virtual SIMs. This year, Apple has decided to do away with the SIM tray altogether on U.S. iPhone 14 models.

iPhone 14 Pro vs iPhone 13 Pro: Which One Should You Buy?

Apple no longer sells the iPhone 13 Pro, so buying either of those phones new is pretty much out of the question. But is the iPhone 14 Pro a worthy upgrade? Well, like most things, that depends.

The very first thing that depends on is how much moolah you can afford to spend on a phone right now. At $2,239 for a completely decked-out iPhone 14 Pro Max, you’re not getting an iPhone 14 Pro for peanuts.

It all comes down to whether all of those things are enough to justify the upgrade for you.

An iPhone 13 Pro or even an iPhone 12 Pro will serve you just fine for now, provided you can go without having the latest and greatest from Apple. And if you can’t, well — why are you here instead of on Apple.ca pre-ordering your new iPhone 14 Pro?

Click here to learn more about iPhone 14 Pro on Apple.ca.