We’ve had many questions asking “what time do unlocked iPhone 7 and iPhone 7 Plus pre-orders launch in Canada?” The answer? Friday, September 9th at 12:01AM PDT/3:01AM EDT. This also applies in the USA and other first wave launch countries.

Yes, that means you’re going to stay up late or set your alarm to pre-order an iPhone 7 or iPhone 7 Plus. The best way to pre-order, if you don’t know already, is to use the Apple Store iOS app, as that usually goes online first before Apple.ca. 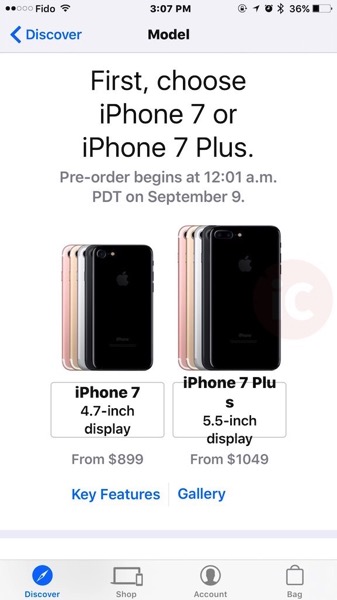 Make sure you fill in your address and payment details now, before the Apple Store goes down this evening, as once the store goes back online, initial iPhone 7 and iPhone 7 Plus models will surely sell out, as always (especially Jet Black, this year). You don’t want to be scrambling entering in your details during check out.

Unlocked iPhone 7 and iPhone 7 Plus pricing is as follows:

Last year, Apple had Reserve and Pickup for iPhone 6s, and the option could return this year in the Apple Store iOS app (for unlocked and carrier contracts), so let’s wait and see.

What are you going to pre-order tonight? Send us a tweet @iPhoneinCanada tonight–talk to you then.