Apple’s iPhone was the best-selling technology product of 2017, reads a new report from USA Today, outselling all the products in positions #2 to #5 combines.

According to Daniel Ives, an analyst with GBH Insights, who compiled the chart for USA Today, Apple will sell 223 million iPhones in 2017, up from 211 million phones the previous year. The iPhone dominance follows news that Apple led the market in device activations leading up to Christmas.

“Apple took a risk in introducing three new iPhones for 2017 — the top-of-the-line most expensive iPhone ever, the $999 X, along with two products that to many consumers seemed like minor upgrades over last year’s 7 and 7 Plus, the 8 and 8 Plus,” reads the report.

“Both the 8 and 8 Plus were overshadowed by the excitement for the X, which was initially sold out and listed for thousands of dollars on eBay,” the report continued. 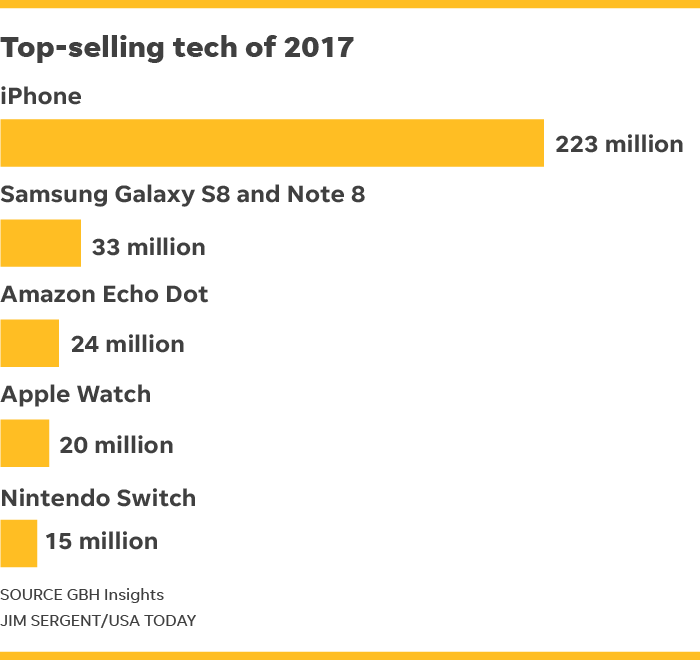 Coming in second place are Samsung’s Galaxy S8 and Note 8. Samsung would likely claim that the chart is unfair as it lumps together all iPhone models sold during the year against just two models from the Korean company.

In third place comes the Amazon Echo Dot speaker, selling 24 million units. These impressive number have undoubtedly been helped by the price reduction from $49.99 USD to $29.99 in the run-up to the holidays, a price Amazon retains today.

Apple also took the number four spot with the Apple Watch at 20 million sales, followed by the Nintendo Switch with 15 million sales.

Apple design chief Jony Ive believes that the Cupertino company will have an even bigger 2018, with a spring update to its compact SE iPhone and more new phones in the fall. Out of the billion-plus consumer base of the iPhone, “350 million of them will upgrade next year,” says Ives.