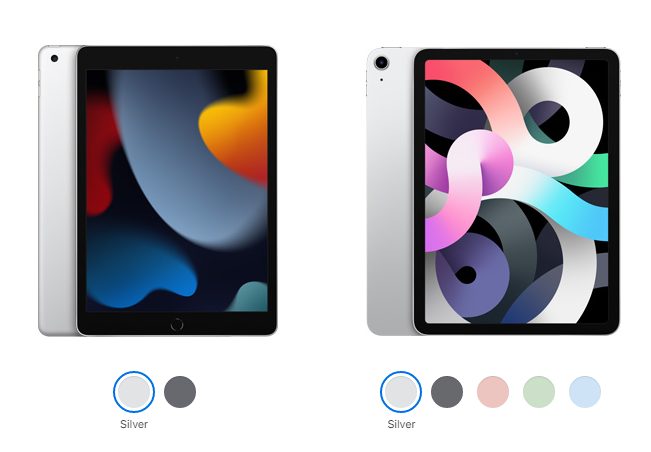 During Tuesday’s ‘California Streaming’ event, Apple announced the iPad 9th Generation — a direct successor to 2020’s 8th Generation iPad, with an upgraded CPU and a new design language inspired by the iPad Air.

Apple’s base iPad has always been a crowd-pleaser thanks to its (relatively) affordable price tag. With the new iPad’s design being based on the iPad Air, let’s take a look at how the new entry-level offering stacks up against the iPad Air 4…

The 2021 iPad 9 features a 10.2″ Retina display, whereas the iPad Air 4 boasts a slightly bigger, 10.9″ Liquid Retina display. Both displays support Apple’s True Tone technology. The new iPad offers a screen resolution of 2160×1620 pixels, whereas the iPad Air 4 clocks in at 2360×1640 pixels. Both iPads offer the same pixel density and max brightness.

While the 2021 iPad has sRGB support, it lacks the full-screen lamination, anti-reflective coating, and wide colour display (P3) found on the iPad Air 4.

The front camera is where the 2021 iPad improves the most. As compared to the iPad Air 4’s FaceTime HD camera, the new iPad gets a more powerful 12 MP Ultra Wide front-facing shooter. The iPad Air 4 comes with Smart HDR 3 for photos, whereas the 2021 iPad sticks with normal HDR for photos.

The new front-facing camera comes with 2x zoom out, ‘Center Stage’, and extended dynamic range for video up to 30 fps. The 2021 iPad can also record 1080P HD video at 25 fps, 30 fps, or 60 fps, whereas the iPad Air 4 lacks support for varying frame rates.

The new iPad 9 is powered by an A13 Bionic CPU, the same one found in the iPhone 11 lineup. The iPad Air 4 leaps a generation ahead, with the A14 Bionic chip under its hood. Both chips have been designed with desktop-class architecture, and both include dedicated Neural Engines.

The new iPad supports the Lightning connector, whereas the iPad Air 4 switches over to USB-C. Both devices are compatible with Apple’s Smart Connector.

Both the 2021 iPad 9 and the 2020 iPad Air have Touch ID sensors. The new iPad has its Touch ID sensor embedded into the Home button, whereas the iPad Air 4 neatly tucks its sensor away into its Power button.

Provided you opt for the Cellular variant of either iPad, both devices support Nano-SIM and eSIM, along with Apple SIM (where available).

The iPad Air 4’s design is focused on being slim, light, and bright. Apple has attempted to emulate that design language with the 2021 iPad, even though the chunky Home button still persists. As a result of Apple’s design choices, this year’s iPad 9th-gen does get a fresh look compared to before.

Both the iPad 9 and iPad Air 4 are available in 64 GB and 256 GB storage configurations, with Wi-Fi only or Wi-Fi + Cellular options.

With competition between the two devices being as close as it is, whether you should spring for the new iPad or last year’s iPad Air 4 depends majorly on what you value most. Interested in getting the latest and greatest Apple product? Go for the iPad 9. Don’t want a Home button getting in the middle of your viewing experience? Go with the iPad Air 4.

The edge in performance afforded to the iPad Air 4 from the iPad 9’s processor being one generation older is, in practice, marginal at best. Both the A13 Bionic and A14 Bionic handily beat Qualcomm’s flagship Snapdragon 888 processor for mobile platforms.

The iPad 9 does have a better front camera module, though, and let’s face it — on a tablet, the front snapper sees significantly more use than the primary camera. On the flip side, the iPad Air 4, like its name suggests, is considerably more compact and light, despite the improvements Apple has made to its base iPad over last year’s iteration.

Click here to learn more about the 2021 iPad on Apple.ca. For a detailed overview of what’s new with the 2021 iPad, take a look at our comparison between the iPad 9 and iPad 8.

Preorders for the 9th-gen iPad went live shortly after it was unveiled, with an official launch scheduled for next week on Friday, September 24.