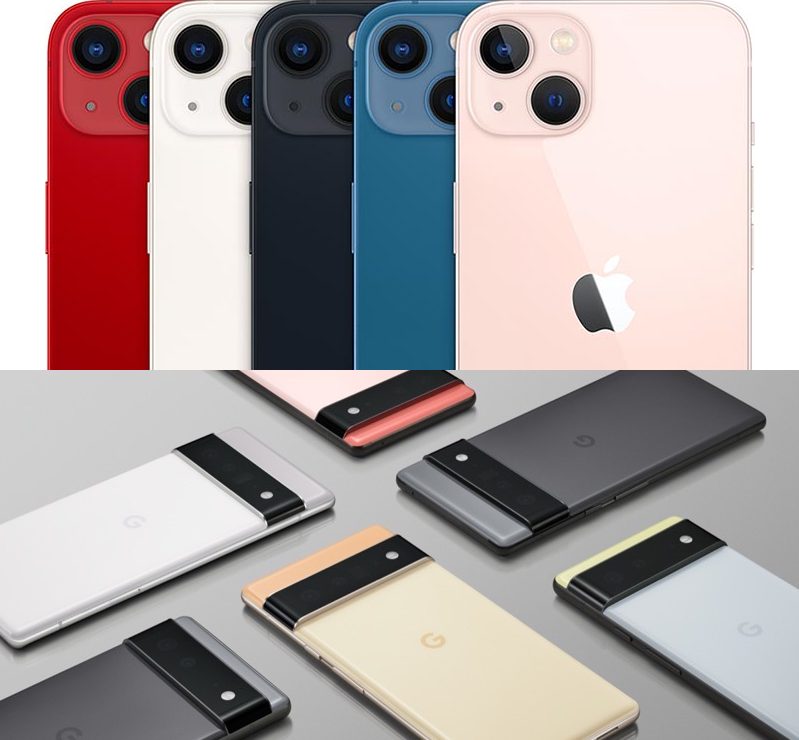 Let’s take a look at how the Pixel 6, with Google’s own silicon for the very first time, stacks up against the iPhone 13 — Apple’s latest smartphone powered by its own silicon as well.

The Pixel 6, on the other hand, is available in three colours: Sorta Seafoam, Kinda Coral, and Stormy Black.

The base iPhone 13 lacks the ProMotion technology found on the ‘Pro’ models, and only has a static 60Hz refresh rate. While the Pixel 6’s 90Hz screen doesn’t deliver the fluidity of a 120Hz refresh rate panel, the extra 30Hz over the iPhone 13’s display makes a world of difference.

The Pixel 6 also offers an always-on display, a feature notably absent on the iPhone 13. One day right, Apple?

For screen protection, the iPhone 13 is fitted with Apple’s scratch-resistant Ceramic Shield, whereas the Pixel 6 has Gorilla Glass Victus. The iPhone 13 display is also treated with an oleophobic coating.

The iPhone 13 carries the same design language as its predecessor, with the biggest difference between the two being the layout of the rear camera module. The iPhone 13 has an aluminum frame, sandwiched between a glass front and a glass back.

For the Pixel 6 lineup, Google went back to the drawing board, and love or hate the linear camera module on the back all you want, the new dual-toned design is fresh and ambitious. The Pixel 6 is made up of a glass front, a glass back, and an aluminum chassis.

Apple wasn’t able to eliminate the ‘dreaded’ notch with this year’s iPhones, but did decrease the size of the notch on the iPhone 13 by roughly 20%, making the notch (slightly) more bearable.

The Pixel 6, on the other hand, has a much smaller punch-hole cutout at the top of the display for its front snapper.

The iPhone 13 comes with MagSafe support built into it for accessories and wireless chargers.

Both devices have a stereo speaker setup.

The iPhone 13 has already established itself as a bonafide go-to for both photography and videography, with a spectacular camera setup and Apple’s powerful camera features.

As good as the cameras on Pixel phones are known to be, Google has really pushed itself with this year’s lineup.

The iPhone 13 and Pixel 6 both lack a telephoto lens, which is available on pricier ‘Pro’ models. The iPhone 13 can’t shoot in Apple ProRAW, but the Pixel 6 has RAW imaging capability.

Google has equipped the Pixel 6 with a number of new camera features like Magic Eraser, Motion mode, Real tone, Face Unblur, and Manual white balancing, most of which are accelerated by the Tensor chip’s AI and machine learning capabilities. These are some impressive photo features.

In comparison, the Pixel 6 has an 8 MP wide-angle sensor on the front with an ƒ/2.2 aperture that only manages 1080p video recording at 30 fps.

There’s a caveat, though — Google has peculiarly limited the storage options you get for the Pixel 6 series by device colour.

For the base Pixel 6, both the Stormy Black and Sorta Seafoam colour options are available with either 128GB or 256GB of internal storage, but you can only get Kinda Coral in a 128GB configuration. Just why, Google?

While the Pixel 6 does support Android’s ‘Face Unlock’ feature, it also comes with a good ol’ optical, under-display fingerprint sensor, something Apple customers have longed for. The Pixel 6 is also fitted with Google’s Titan M2 security coprocessor with dedicated security core.

Apple has bumped battery life on this year’s lineup, with the iPhone 13’s rather modest 3,240 mAh cell getting 19 hours of video playback (as opposed to 17 hours on its predecessor).

For juice, the Pixel 6 packs a 4,614 mAh battery. While Google marketed the Pixel 5 as having an “all-day battery”, the company says The Pixel 6 “can last beyond 24 hours” on a single charge.

The Pixel 6, on the other hand, manages 30W fast charging with USB Power Delivery 3.0 over a wired connection, which Google says gets the phone from 0-50% in 30 minutes, along with 21W fast wireless charging. The Pixel 6 also comes with built-in reverse charging capability.

So which phone to buy? That’s up to you. If you’re tied to the Apple ecosystem, it may be harder to leave and switch to Android due to iCloud and other services, if you’re deeply entrenched. Price-wise though, it’s cheaper to buy a Pixel 6.

Apple does provide longer iOS updates, whereas Google said its Pixel 6 phones will get updates for three years.

For a detailed overview of how the iPhone has improved generation-over-generation, take a look at our comparison between the iPhone 13 and iPhone 12.

To see how Google’s newest Pixel phone stacks up against the previous generation, check out our comparison between the Pixel 6 and Pixel 5.

Click here to order your iPhone 13 from Apple.ca today.

Pre-orders for the Pixel 6 and Pixel 6 Pro are already live. Get yours today from the Google Store, Amazon.ca, Best Buy, Rogers, Telus, Glentel, or Freedom Mobile.